How Designers Think: The Problem of Intramentality

One of the most useful documents on design as cognition that I've ever encountered was in a thesis document by Henrik Gedenryd, called How Designers Work: Making Sense of Authentic Cognitive Activity. In it, Henrik describes the cognitive process of design as a form of inquiry: a way of understanding the world around us, with the world around us. When we talk about the benefits of having a designer working on a project, or "design thinking", or "solving problems like a designer", this is what we mean, and Henrik has described the problem and opportunity as "intramentality":

The most striking example of a not-so-convincing explanation is how the cognitive role of the physical world has been accounted for, by treating the world as an extension of long-term memory, while at the same time considering long-term memory as a part of the environment (Newell & Simon 1972, Simon 1981). But however bizarre this explanation appears, there seems to be no better alternative, given the foundational assumptions of these theories... I believe the question of what caused this failure to be an important one, which must be settled before we can put these theories and their hidden assumptions behind us, so as to make progress and not make the same mistakes again. It is also necessary if we are ever to move beyond general criticism and vague claims that "one must also take social and cultural factors into account", etc. For example, it is quite widely recognized that Information Processing theory (Newell & Simon 1972) has proven inadequate as a fundamental theory of cognition. However, the standard diagnosis is that its problems are located in the computer model of mind and the symbolic view of cognition. As will become evident, much of this book revolves around the question of exactly what caused the problems and rendered these theories deficient. As I will argue in detail, although these features are problematic, they are not the crucial defects. At the heart of my diagnosis, which I will present in chapters 1 and 3, is that intramentality is the culprit.

His diagram offers a visual representation of this idea, with the traditional view of cognition on the left, and a new approach on the right: 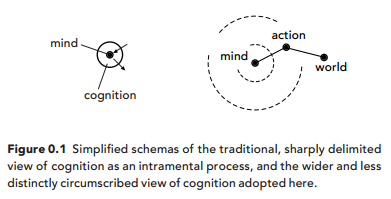 Intramentality refers to a state of experience cognition: the internal dialogue or reason. It's juxtaposed with interactivity, a way of understanding the world based on the interactions one has with it. This is the heart of artifact-based learning, or externalization. I think it's also why there's something quite powerful in the phrase "close your laptop": the laptop has become an extension of our intramentality state, and the rich thinking that occurs through visual conversation can't actually occur.I intend to explore intramentality a great deal more, because I (like Henrik) believe it to be one of the largest educational blocks we face in learning to design.

The story of Henrik Gedenryd has an unfortunate ending, as he passed away in 2005, prior to the thesis being recognized and published in any large scale. His thesis is available in its entirety here and I highly recommend you read it.

Want to read some more? Try Words Matter: Design, Experience, the WSJ and the UXPA.